Stranger Things as a Novel 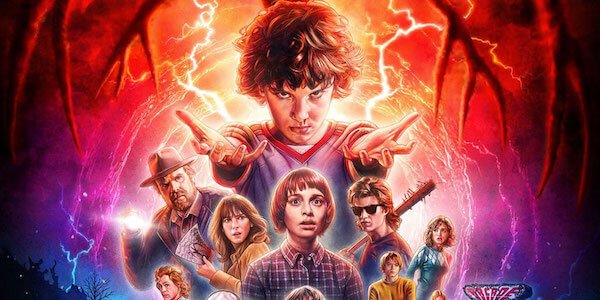 I can’t remember hearing anyone talk badly about Stranger Things. It is a fantastic story.

But why is it so good?

There are a few reason. But I believe one of key reasons is how well it follows the classic hero’s journey plot structure.

This post is a look at just how well Stranger Things follows this pattern.

As a quick bit of context, the hero’s journey begins in the ‘ordinary world,’ with a call (and refusal) to adventure. Then, around the 25% mark, the story switches to the ‘special world.’ The adventure begins. From here, the rest of the story is spent on a series of attempts and failures until the final conclusion.

A note: it’s usually the ‘hero’ that goes from the ordinary to special world. But in this case, there are five different story lines, which means five different heroes, or protagonists.

Before we get into how the series as a whole breaks down, here’s a quick look at the core motivation for each protagonist:

And one more note, for clarity: There are other key characters, like Jonathan, the rest of the party (Dustin, Lucas, and Will), and Steve. And while each has their own character-arc, they are not protagonists. They are important, but they are still supporting characters. We know this, because at the very end, it is the protagonist(s) who cause the resolution. More on that at the end.

So here’s a look at how Stranger Things (season 1) breaks down:

This is the setting, where we figure out what’s what and get introduced to all of the characters. In short, this is the ‘ordinary world’ that will soon be disrupted. Included here is all of the foreshadowing (i.e. Will disappearing; Eleven escaping, etc.).

We’re still in the ordinary world, which is to say that none of the heroes have decided to go on their journey yet. But something else important happens here. There is when the inciting incident (the key moment that eventually pushes them into their journey) happens.

So what is it?

Mike and his friends discover Eleven. Eleven finds people who might become her friends. Joyce gets the call from who she believes is her son. Hopper finds his friend (Benny) dead. And Barb goes missing (the audience knows this, but Nancy, the fifth protagonist, doesn’t yet).

In each case, the protagonists can still turn and reject the call into the special world.

Sequence three, or around the 25% mark, is where the story actually gets moving. They’ve embarked on their journey.

Hopper gets into the lab (and realizes they’re showing him fake video footage). Joyce is now 100% convinced Will is alive and talking to her. Mike has decided to keep Eleven in his basement. Eleven has decided to stay and become vulnerable to her new friends. And Nancy realizes that Barb is missing.

In all five storylines, the thing that propels them forward is now in place (i.e. Hopper’s investigation of the lab; Joyce’s quest to find her son; Nancy’s quest to prove didn’t run away; Mike and his friend’s quest to understand and know Eleven; and Eleven’s desire to find people who love her).

Episode 4: Leading up to the change

At the very middle of a story is the midpoint: the moment where everything changes. In this sequence (episode), that reveal is being set up.

In this episode Hopper finds Will’s body and cuts him open to realize it’s a fake. The conspiracy is real. Nancy realizes that the man with no face is real when Jonathan confirms it. Joyce gets even crazier with her Christmas lights, deciphering actual messages from Will. Mike hears Will’s voice on the radio that Eleven is holding, proving to him that Will is still alive. And Eleven is able to help Mike by making the bully wet his pants in front of everyone.

By the end of this episode, everything is different. Everyone understands their true quest:

Hopper began believing the crime was small, but learned it was a conspiracy. Joyce’s knew her son was missing, but now knows, supernaturally, that he’s still alive. Mike wanted to find Will and begins making room for Eleven in the party. Eleven finds out that people don’t just want her for her powers. And Nancy’s belief that Barb didn’t run away becomes a belief that Barb was taken by the monster.

The heroes now realizes their true objective, and they begin pursuing it in earnest…but there’s still a major failure before they find success at the end.

Hopper breaks into the lab, but gets caught and drugged. Mike and the party go looking for the gate, but Eleven—scared of what might happen—leads them away from it. Eleven’s new friends turn against her. Nancy (and Jonathan) actually do find the Upside Down, but Nancy gets lost in it.

At the end of this sequence, Mike’s friends are divided. Eleven is on her own (again). Hopper realizes the conspiracy extends to the federal government. Joyce finally has a true ally (Hopper) in finding Will. And Nancy, it appears, might be stuck in the Upside Down forever.

Episode 6: The final piece of information

The 5/8th point is a pinch point. This is where we get the last twist before the hero enters the final battle. It often happens just before the end of sequence five (from above).

Nancy gets out of the Upside Down. But she’s pretty scared. She went up against it, and it beat her. She’s not sure if she’ll be able to do it again. After Mike yelled at Eleven, she runs away, and so he (and Dustin) go looking for her, but they get into trouble with the bullies. Eleven couldn’t quite fit in, and she ended up driving away those she tried to love. Meanwhile, Hopper and Joyce track down Eleven’s mom, which turns out to be a dead-end.

In the story, this is point of desperation which forces the protagonist to do the ultimate thing: throw all caution to the wind and go after the villain…even if it means death. That’s what we see unfolding in sequence (episode) seven.

Episode 7: The beginning of the end

This is the final no-turning-back moment. Where everyone faces their demon and a final resolution (for better or worse) happens. And in the case of Stranger Things, all of the storylines pretty much share the same screen time (or close to it), blending a lot of the protagonists journeys together.

Mike’s party reunites and officially goes on the run from the authorities. Eleven flips the van, violently showing the ‘bad men,’ that she won’t go back without a fight. Shortly after, Hopper gets everyone together and they discover how to create an isolation chamber so that Eleven can properly communicate with the Upside Down. Hopper and Joyce go to the lab and are captured once more. Nancy (and Jonathan) get their ‘monster hunting’ supplies again, set a trap to lure the monster toward them.

Sequence seven ends with each protagonist committed and ready for their final attack.

Episode 8: The climax and resolution

Here everything comes together and is wrapped up.

Hopper cuts a deal with the lab, which allows him and Joyce room to find Will—which they do (a win). Meanwhile, Nancy (and Jonathan) trap the monster in a bear trap and Nancy shoots it with Jonathan’s dad’s gun. Also meanwhile, Mike sees the ‘bad men’ coming and gets Eleven (who is weak now) and ‘the party’ to safety. Except…the monster (who escaped from Nancy) found them. Eleven summons the last of her energy kills the monster, saving her friends.

A note on the resolution: As mentioned above, it’s the hero that must bring about the conclusion. This is ultimately how we know who the protagonist is (i.e. who the story is about). This is also how we know that the secondary (though still important) characters, like Jonathan, the rest of the party, and Steve, are not the protagonists.

Stranger Things is great for a lot of reasons. It’s nostalgic to the max. The acting is superb. But, ultimately, I believe, it’s their use of these things combined with solid storytelling that makes it so great. When it was announced that Season three was pushed back because it wasn’t ready, I was okay with that. They have a lot to get right. And, my prediction (here in April of 2019), is that they will.