Learning from Shaun of the Dead’s plot structure 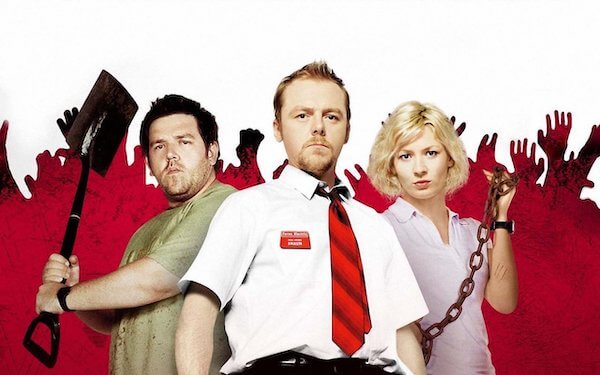 Shaun of the Dead (2004) is about a guy who decides to get his girlfriend back and turn his life around, only–one problem–Zombies have taken over their world.

The movie has an runtime of about 94 minutes, putting the one-quarter and one-eight marks every 24 and 12 minutes, respectively.

The movie’s structure is pretty close to hitting to staying close to these markers throughout.

The Inciting Incident (12%) comes at 13 minutes when Sean is buying flowers for his mom and sees a strange man across street as he appears to eat a pigeon.

Next, the the First Plot Point (25%) comes around minute 25 as Shaun drunkenly scribbles, “Go round mums / Get Liz back / Sort life out” on his fridge.

This is the point when Shaun decides to get his life in order, or to enter his quest.

The First Pinch Point (38%) comes a little bit late at the 40-minute mark. This is what ends part one and begins part two. This happens when Shaun and his best friend Ed realize their roomate, who was still upstairs in their house, had turned into a Zombie and so they run for it.

(What’s important to remember in a movie like this is that the zombies are just the settings. Shaun’s journey is not to destroy the zombies but to grow up and commit to his girlfriend Liz. The plot points reflect this.)

The Midpoint comes at minute 50. Shaun goes to Liz’s appartement and convinces Liz (and her roomates) to come with him to a safer place, the Winchester Pub. In Shaun’s arc, this is him, the hero, taking a proactive role.

The Second Pinch Point (62%) comes once Shaun and company (Liz, his best friend Ed, his mom, and Liz’s two roommates) realize there are a massive amount of zombies separating them from their destination, the Winchester Pub. This happens at minute 59.

The Second Plot Point, the 75% mark, comes a little bit early. This is also where part two ends and part three begins. Shaun realizes the only way to allow his friends to get into the Winchester is for him to draw the crowd of zombies away. This happens at minute 64.

Once in part three, there are only three more plot markers: the Climax (88%), the All is Lost Moment, and the Resolution (around 98%).

(Technically, no new information is allowed to enter the story once part three starts. However, that doesn’t the viewer cannot learn new things. In the case of Shaun’s mom turning into a zombie, we didn’t know she was bitten, but it was foreshadowed several times leading up to this, so when we learn, we recall back to the points earlier in the story and it makes sense.)

The Climax comes shortly after this as the zombies gain the upper hand and break into the pub (around minute 82). Liz’s two roomates die in the process, and Shaun, Liz, and Ed are forced to run into the basement of the Winchester.

The All is Lost Moment comes when Shaun loses hope. This happens when he simultaneously realizes a few things: Ed, his best friend, was bitten and will soon becomes a zombie; the three of them are trapped in the basement and it will only be a matter of time before the zombies break in; and they only have two bullets left in their gun, meaning, at best, they can let Ed become a zombie and then kill themselves with the last two bullets.

Finally, the Resolution comes (around minute 90) when Shaun realizes the basement’s escape hatch is motorized and he finds the button to open it. Ed takes the gun and stays behind while Shaun and Liz get out.

What’s important to remember here is that the protagonist (Shaun) brings about the resolution in the story. In this case, it was Shaun who finds the button and saves him and Liz. Once they get out, they meet soldiers who have come to kill the zombies.